The Brigade School @ J. P. Nagar celebrated its Pre-graduation Day on 9 February 2018 for the 10th batch
of class 12 students. The Principal Ms. Parthasarathy, administered the oath to 65 students.

As part of the event, Vedavyas Vempati of Class 12 took the audience down memory lane while he spoke about his schooling right from LKG to Class 12. Karthik Suraj Vasisht who was awarded the Navaneethan Award for the Best Outgoing Student also gave the valedictory address.

The event culminated with the School Flag being handed over to the newly elected School Captain Vijay Ganesan by the outgoing School Captain Karthik Suraj Vasisht. 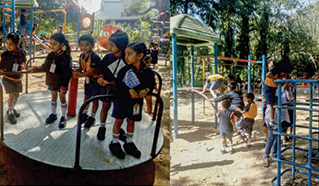 The students of Nursery visited Dhanvantri Park. They interacted with the gardener who introduced them to resident trees & flowers while they frolicked among the fauna.

The students of LKG hopped, skipped & jumped their way the Woodrose Club through the Millennium Park adjoining the school. On their way, they were greeted by the gardener, security guard and waiters at the club. They were taken by sweet surprise when the bakery chef demonstrated the process of baking cakes to them.