Transit-Oriented Developments: The New Wave in the Real Estate Market 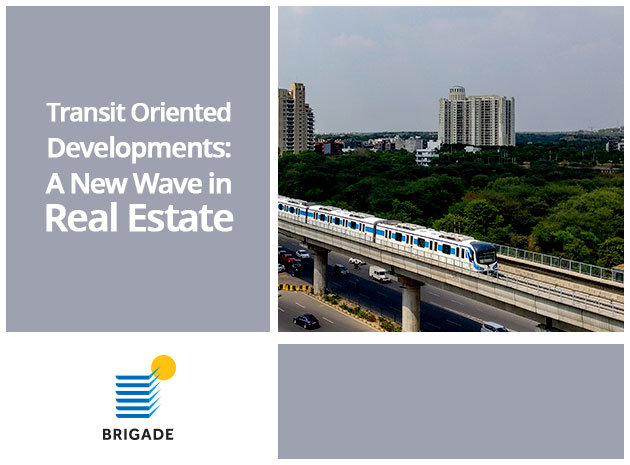 The real estate industry is witnessing a major growth and developers are leaving no stone unturned to get innovative. With the comfort of the immediate users in mind, developers are taking some creative decisions with their projects.

With the current innovations in the real estate market, developers are now looking at the new trend: Transit-Oriented Development.

What is Transit-Oriented Development?
With sustainable urban growth in mind, transit-oriented development (TOD) refers to a type of urban development created to maximise the residential, business and leisure space within walking distance from public transport. The whole concept came about to encourage more ridership for public transport, reduce the use of private cars and give rise to compact urban growth. The typical TOD includes a central transit stop (train stations, metro stations and bus stops) surrounded by high-density mixed-use area and low-density areas that spread then onwards.

Transit-Oriented Development In India
India is going the urbanisation route at a break-neck speed. This is gradually resulting in major cities in accommodating more and more people, extending the municipal limits. Additionally, there has been a rise in the number of private vehicles. With rapid urbanisation, majorly in India, cities are witnessing a major horizontal growth and giving rise to the problems of urban sprawl. This eventually refers to the increased usage of private vehicles, leading to increased pollution and increased demand for infrastructure. With the TOD concept, major cities are using transport infrastructure and land use to give cities a livable, healthy and smart edge.

Transit-Oriented Development In Bangalore
It was predicted that the Bengaluru Metropolitan Region (BMR) is expected to grow from 9.1 million in 2011 to 20.3 million by 2031. And to accommodate this population growth doubling the land requirement is not the answer. What Bengaluru needs is an optimisation of the available land and compact developments. The traffic congestion in Bangalore is mainly due to personal vehicles and less than perfect road networks.

The need of the hour is well-planned land-use developments, for instance; initiatives to develop properties in a strategic way that allows easy transit access. Some of our Brigade properties that display such developments would be the Brigade Bhuwalka Icon at Whitefield that has the proposed metro project and the World Trade Center at Rajajinagar which shares proximity with the Yeshwanthpur Metro Station.

Slowly but steadily, India is headed towards more compact and sustainable urban developments with initiatives like TOD and raising the bar for commercial innovation.