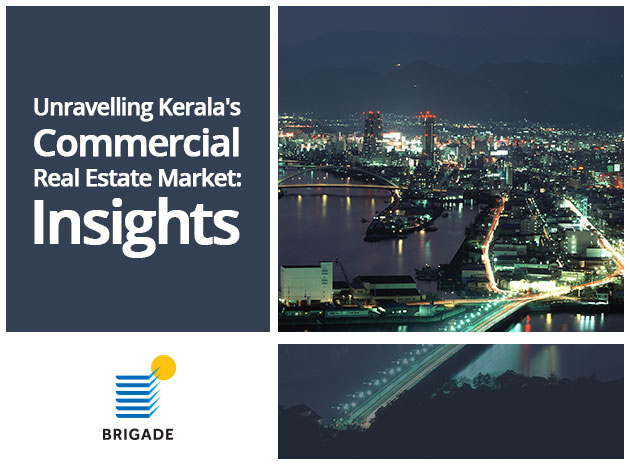 Kerala, India’s first digital state, has been undergoing exponential growth in the past due to the availability of skilled manpower and quality of life that has been instrumental in developing a knowledge-based digital industry ecosystem in the state.

Surrounded by highly developed neighbouring cities like Bangalore, Chennai and Hyderabad, Kerala is on its way to emulate them and make major progress with its world-class cities. The Kerala government has already had a strong head start with the inauguration of major large-scale commercial hubs like the Kochi (Infopark) and physical infrastructures like national highways, airports, ports and Metro Rail to make the area more accessible. This has also led to the adoption of digital facilities for the state.

The real estate industry in the state has undergone a major shift, as noticed in Kochi. Their advancing modernism and urbanisation have given rise to a major evolution of the real estate asset classes like Commercial, Retail, Residential and Hospitality development.

Kochi is considered as one of the fastest emerging IT hubs in the country. With a wide range of industries available, the city has seen massive growth in the past decade. With the support of the government, the city is also now seeing a booming technology sector. Developed by the state government, Trivandrum’s Technopark and Kochi’s InfoPark are home to multinational companies. This has opened up many avenues for the people. The IT sector especially has turned to Kochi, owing to the lowered costs of doing business and the pleasant climate to conduct day to day operations. This has resulted in a growing need for quality office spaces, paving the way for remarkable development in the commercial real estate sector. Brigade has also developed the World Trade Center at Kochi, Infopark, the second-largest IT Park in Kerala and one of the most sought after business destinations in the country. This has given Kochi a global headstart and opened up remarkable opportunities for businesses in the vicinity.

Another city looking towards a massive futuristic development is Kozhikode (Calicut). The city is on its way to make a strong foothold in India’s realty sector with the influx of mixed-use developments. The city is recorded to be one of the key commercial cities and trade hubs owing to its convenient connectivity, and it is also recorded to contribute to 12% of the state income as of 2012 as reported in an article by Business Wire.

This stated, Kerala is slowly emerging as one of the most profitable destinations to do business in the country.