How to Make the Most of Your Commute to Work? 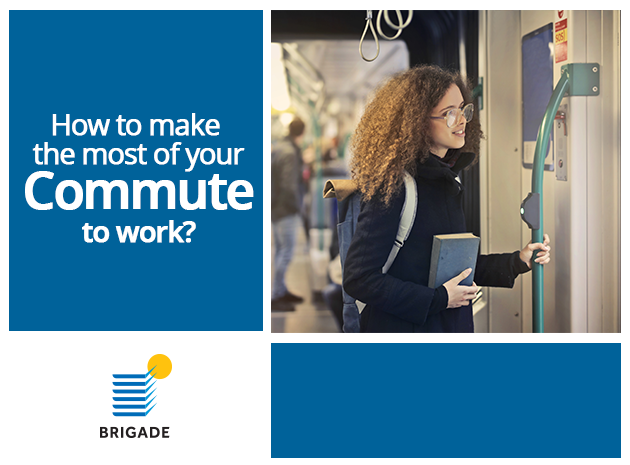 Do you commute to work? You’re not alone. In fact, we’ve all been there.

You may have a daily commute of 45 minutes each way. At least that’s what Google Map shows you at the start of your journey.

But how does it turn into an hour, or even an hour and 15 minutes? Possibly an accident, jam packed roads, may be even a delay in the metro rail.

To compensate for these inevitable delays, a way out is to leave for work early, and even earlier if possible. That’s means, going to bed early too. Otherwise, you will certainly be tired throughout the day.

And what do you end up doing on these hour long commutes? Stare at the clock, always panicking, as the signal changes into red.

Stuck in Commuter Hell?
More and more organisations are considering work from home or flexi-time policies. Yet commuting seems to be growing ever more.

Whether you are taking the car, bus, underground, bike or on foot, we can all agree that these commutes to work are making you miserable. It just seems like a drag. Welcome to the club.

A Mercer study in 2017 reported that people on longer commutes were prone to experience depression and have more financial related concerns. Many have reported feeling stressed by work. Obesity seems more prevalent in such people, especially when they are getting less than 7 hours of sleep at night.

A ton of scientific studies has gathered evidence that a correlation exists between your length of commute and productivity at work, your satisfaction at your workplace and home. It can impact your physical and mental well-being too.

But it does not have to be that way. If you think commuting is just wasted time, it is time to reclaim people’s dead time as one of the best parts of your day.

How to Make the Most of Your Commute to Work?
You may not have any option but to endure these long commutes every day but that should not translate into endless suffering resulting in detrimental consequences. After all, you have the entire workday to deal with and travelling these highly trafficked distances to work should not have a negative impact because of it.

Multiple research studies have found that the experience of long commutes can be made less stressful. The end goal is to make you feel refreshed, engaged and performance driven when you get to work.

As it has rightly been stated that “Commutes are no longer downtime, it’s productivity time.”

That’s because gone are the days of you shuttling back and forth, sleepy-eyed, in a bubble of silence. Fast forward to the age of smartphones, tablets, headphones, smart cars that can make you commute stress-free and more productive than ever.

Use Your Commute to Prepare Yourself to Transition into Your Job Role
Everyone has designated roles that they play out in different places. For example, when you are at home, you possibly are a parent, partner, a roommate or even a caregiver. Similarly, at work, you may be a supervisor or a colleague.

In the midst of a busy working schedule, often, transition from one role to the other is likely to be abrupt. And that is confirmed by Harvard Business School’s Professor Francesca Gino.

Her research from 2018 finds that instead of listening to music, reading or just relaxing, commute times can maximise productivity if the time is used to transition into your role at work.

Plan your day, set your schedule, work towards your priorities and visualise your goals. When the mind is prepared, it is less likely to suffer from the negative impacts of a long commute.

When you reach work, you are ready to hit the ground running.

Find an Alternative to Driving to Work
Driving to work is not the only available option at your disposal. There are lots of different transportation avenues that you can explore.

When you drive, you are anyways stressed. Perhaps take advantage of public transportation, ride a bike or may be walk to work which can be a more relaxing ride to work. Other than it being a more environmentally friendly alternative, it can also be a good exercise if you choose to ride a bike or walk to work.

Plus, you will suffer from less negative consequences when you do not have to physically drive to work. In fact, you can take the time to learn something new. Listening to audiobooks or podcasts can turn your commute into a classroom.

So, given the choice between taking other means of transport or driving to work, your commute will end up being more productive, if you go with your first option.

Find A Way to Make Your Commute More Social
When you see your long commute as a more social experience, research studies report that people tend to find that more bearable and pleasant.

The University of Chicago published a series of findings that reported people having a positive commute experience when they spent their time chatting with strangers. Obviously, you have to use public transportation to feel this.

But if striking up conversations with total strangers is really not your thing, you can explore alternatives that can also make you commute experience more social.

Carpooling with your colleagues can be one way of doing it. This not only gives you an opportunity to having a social commute experience but also allows you to divide the driving part between all participating co-workers. That means one does not have to deal with the stress of driving every single day.

If co-workers and carpooling is not a viable option try the same tactic with a partner, friend, or even a roommate. One can even try adjusting their schedule to accommodate their partners in carpooling.

It will be worth the effort when you get to enjoy a stress-free commute experience that is an opportunity for you to socialise.

Develop A Morning Routine
Behavioural scientist Francesca Gino published in her research study that “people who maintain small routines on the way to work—such as checking the news on the train—feel more excited about the day ahead, more satisfied with their jobs, and less stressed-out than those who had no set routine.”

This research is supported by adequate evidence that highlights this approach of developing a morning routine on their commute to work. And it also shows commute is not necessarily a bad thing. Plus, a research study conducted by the University of California Transportation Center in 2001 actually found that people were okay with commuting as long as it was within a reasonable time span.

If you look at it from another perspective, the commute itself is sort of like a routine. When you think of it in this manner, the role that you are switching to helps in preparing you for the switch. Therefore, the ultimate transition seemingly is less stressful.

Accordingly, if you have a commute to work that may be involves you taking a flight of stairs, it can help you to create a predictable morning routine. Isn’t that something to look forward to every day?

Starting Your Day Right
The stress of daily commute impacts everybody. As an employer, you should be more sensitive to this and considerate of how employees are affected by these long travel times to work.

You can allow your employees a work from home alternative, albeit occasionally. It can go a long way in relieving the stress of a long commute.

And for the days where you have to commute, make the most of it. Regardless of the length of the commute, make sure that you use the time productively to set the right tone for your day. And for those days when you cannot improve it, just abandon it.

So, let’s imagine a world where you can look forward to your time getting to work.