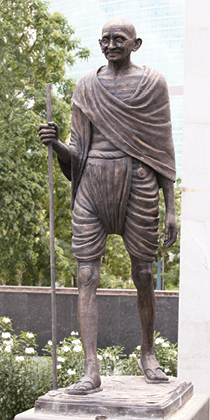 The stately statue of the Mahatma at Brigade Gateway is sure to catch anyone’s eye. A simple person who could inspire immense change. At Brigade Group, we have always seen the Mahatma as our inspiration, and this has helped us to make meaningful contributions to society over the years. What better way to pay tribute to the Mahatma than to install his statue at one of our landmark projects.

The statue of Mahatma Gandhi, was unveiled by Shri Gopalkrishna Gandhi the grandson of Mahatma Gandhi,
on 30th January 2015 at the Brigade Gateway campus. This momentous occasion was witnessed by over 1000 people.

Mahatma Gandhi is a powerful icon, the father of our nation who captured the attention of the whole world with his simple but powerful ideals. His message still holds relevance today. And more importantly, we as an organisation have the deepest respect for him and we thought that immortalising him in our flagship project will be the ideal way to pay homage to the great soul.

The installation of Mahatma Gandhi’s statute at the iconic Brigade Gateway campus is our humble tribute to Mahatma Gandhiji, who united millions of Indians and led them to achieve the impossible. While the world is shaken by acts of violence and hatred, we feel it is never too late for us to follow the principles of non-violence that Mahatma Gandhi preached and practiced. 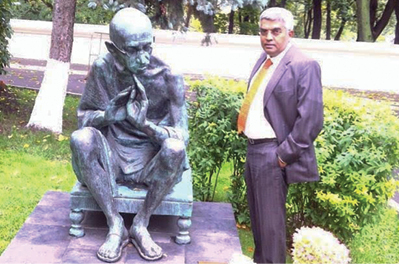 M R Jaishankar at the Indian Embassy, Moscow in September 2012

Father of the nation

When Gandhi was born, British rule had been securely established in India. The uprising of 1857, known as the Mutiny, had merely served to consolidate the British adventure into an empire. India had effectively passed under British tutelage so effectively that instead of resenting alien rule, the new generation of educated Indians were eager to submit to the “civilising mission” of their foreign masters. Political subjection had been reinforced by intellectual and moral servility. It seemed that the British Empire in India was safe for centuries. 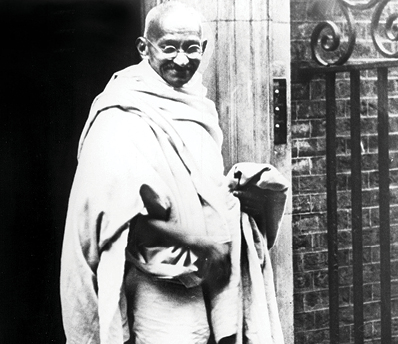 At 10, Downing Street, after an interview with the British Prime Minister,
Ramsay MacDonald

When Gandhi died, it was as a free nation that India mourned the loss. The disinherited had recovered their heritage and the “dumb millions” had found their voice. The disarmed had won a great battle and had, in the process, evolved a moral force such as to compel the attention and to some degree, the admiration of the world.

The story of this miracle is also the story of Gandhi’s life, for he, more than any other, was the architect of this miracle. It is not for nothing that his grateful countrymen called him and have continued to call him the Father of the Nation.

And yet it would be an exaggeration to say that Gandhi alone wrought this miracle. No single individual, however great and wonderful, can be the sole engineer of a historical process. A succession of remarkable predecessors and elder contemporaries had quarried and broken the stones which helped Gandhi pave the way to India’s independence. They had set in motion various trends in the intellectual, social and moral consciousness of the people which the genius of Gandhi mobilised and directed in a grand march. Raja Ram Mohan Roy, Ramakrishna Paramahamsa and his great disciple Swami Vivekananda, Swami Dayanand Saraswati. Dadabhai Naoroji, Badruddin Tyabji, Syed Ahmed Khan, Ranade, Gokhale, Tilak, Aurobindo Ghosh and Rabindranath Tagore, to name a few, had created a consciousness of India’s destiny and helped to generate a spirit of sacrifice which, in Gandhi’s hands, became the instruments of a vast political-cum-moral upheaval. Had Gandhi been born a hundred years earlier, he could hardly have achieved what he did. Nevertheless, it is true that but for Gandhi, India’s political destiny would have been vastly different and her moral stature vastly inferior.

But though Gandhi lived, fought and died in India, and for Indians, it is not in relation to India’s destiny alone that his life has significance.

With Sarojini Naidu at Dandi

He will not only be remembered as a patriot, politician and nation-builder, but essentially as a moral force that touched the conscience of human kind and the universe. He was the servant and friend of man as man and not as anyone belonging to any nation, religion or race.

If he worked for Indians only, it was because he was born among them and because their humiliation and suffering triggered his moral sensibility.

The lesson of his life therefore is for all to read. He founded no church and though he lived by faith, he left behind no dogma for the faithful to quarrel over. He gave no attributes to God, save Truth and prescribed no path for attaining it save, Honesty and relentless search through means that injure no living thing. Who dare therefore claim Gandhi for his own except by claiming him for all?

Another lesson of his life which should be of universal interest is that he was not born a genius and did not exhibit, in early life, any extraordinary faculty that is not shared by the common run of men. He was no inspired bard like Rabindranath Tagore, he had no mystic visions like Ramakrishna Paramahamsa, he was no child prodigy like Shankara or Vivekananda. 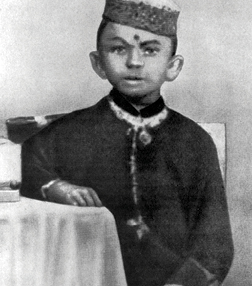 Gandhiji at the age of seven

He was just an ordinary child like most of us. If there was anything extraordinary about him as a child, it was his shyness, a handicap from which he suffered for a long time. No doubt, something very extraordinary must have been latent in his spirit, which later developed into an iron will and combined with a moral sensibility made him what he became, but there was little evidence of it in his childhood.

We may therefore derive courage and inspiration from the knowledge that if he made himself what he was, there is no visible reason why others should not be able to do the same. His genius, if that word must be used, was so to say, an infinite capacity for taking pains in fulfilment of a restless moral urge. His life was one continuous striving, an unremitting sadhana, a relentless search for truth, not abstract or metaphysical truth, but such truth as can be realised in human relations. He climbed step by step, each step no bigger than a man’s, till when we saw him at the height, he seemed more than a man.

I contemplate a mental and therefore a moral opposition to immoralities. I seek entirely to blunt the edge of the tyrant’s sword, not by putting up against it a sharper-edged weapon, but by disappointing his expectation that I would be offering physical resistance. The resistance of the soul that I should offer instead would elude him.

Such is the great lesson of his life. Fortunately, he has himself recorded for us the main incidents of his life till 1921 and described with scrupulous veracity the evolution of his moral and intellectual consciousness. Had he not done so, there would have been in India no dearth of devout chroniclers who would have invented divine portents at his birth and invested him with a halo from his childhood.

How right Tagore was when he sang: “Your speech is simple, my Master, but not theirs who talk of you.”

Excerpts from the book titled
“Mahatma Gandhi - A Life Through Lenses”