Sleeping Pods in Office Space: A Luxury or Necessity? 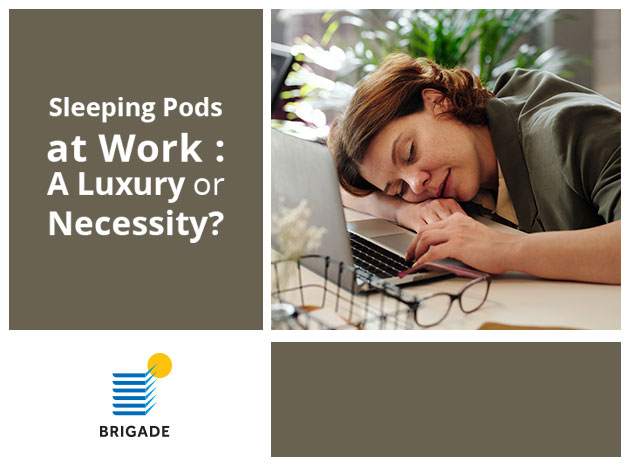 Ever felt drowsy after having lunch in the office? Or felt fatigued working continuously in front of the screen?

Everyone during his work time must have dozed off some or the other time. Feeling sleepy or tired during office hours is looked down upon. Especially in the corporate world one has to stay active 9-5 for maximum output.

The current time is the time of cut-throat competition. Everybody needs to be working on the edge. This means more output requirements from each employee. They need to put in extra effort and time. This high-level stress can block the employees’ brains from functioning to their full potential. It can also affect them mentally. They may develop sleep deprivation. Or even worse, insomnia.

An online study was conducted by global market research firm KJT Group in 2019 on behalf of Philips which included 11,006 adults (18 and older) in 12 countries. The study revealed that India tops for the most restful populations, meaning Indian adults get quality sleep.

But the situation is not the same everywhere. According to a National Sleep Foundation survey, the adults in the UK are getting an average of six hours and forty-nine minutes. In the USA it is six hours and thirty-one minutes and the worst-hit is Japan with average sleep hours of six hours and twenty-two minutes.

What happens to the employees when the work-life is taking a toll on them? That is bound to make them sleepy at the office.

Mental stress and sleep deprivation have become major issues in the corporate world. Employers are starting to recognize the importance of sleep. They have now started heeding the concept of power naps in the office.

Sleeping pods are the most trending facilities to offer relaxation to the employees. It also attracts millennials and helps to boast off about one’s organization. But how justified it is to allow the employees to sleep during the working hours?

Advantages of having sleeping pods:

Many big organizations like Google, Nike, P&G, etc. have already implemented the solution. As per Forbes, millennials are more attracted to the changing trend as they are more drawn to a flexible and semi-formal work environment. And with the majority of the working spaces filled with the younger generation currently, it may be a good decision for the offices to deploy sleeping pods. It will allow the employees to rejuvenate.

The changing work schedules have raised the fatigue levels and an office that allows enough sleep to its employees may see an increase in productivity and creativity. Also, looking from a professional angle, providing an opportunity for the staff to recharge their batteries at the office reduces fatigue and the chance of poor performance.

But it is equally important to let the employees understand the value of sleeping pods and its judicial use. The sleeping pods are as good as they are being used to increase productivity and not misuse or exploit it during working hours and increase lethargy.