M R Jaishankar was a panelist at the India Economic Conclave held by Times Network at Le Meridien, Bengaluru.

IEC, is Times Network’s flagship on-ground event which brings together some of the most influential speakers. The theme for this edition was India’s Growth Engine - “Consumption - Crisis or Blip?”. 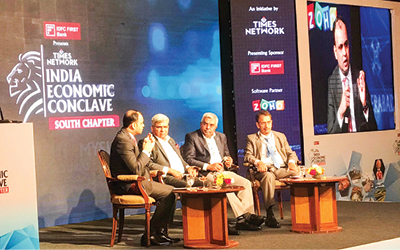 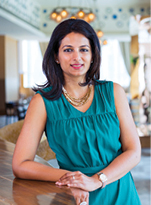 Nirupa Shankar manages Brigade Group’s hospitality ventures. She is also known to have conceptualised the unique lounge bar atop the World Trade Center Bengaluru, called HIGH Ultra Lounge; the highest point for food and beverage in South India. She began her career as a senior business analyst with Ernst & Young LLP in the US after a bachelor’s degree in economics from The University of Virginia. Mrs. Shankar went on to take evening classes in hotel operations at New York University and then studied at the Cornell University’s Hotel Management School, before interning at Four Seasons, Singapore. Shankar returned to India to work in her family business, which had launched the first Mercure hotel in India (later rebranded as the Grand Mercure).

Never the one to take an easy route, she says, “The problems within one’s control are easy to resolve with hard work and the will to get it done. External issues are the “challenging” ones like macroeconomic policies, changes in customer sentiments, the approval time for various licences, etc. We need to keep a positive mindset and take things in our stride.”

Among the changes Shankar has witnessed in the hospitality industry, she lists the entry of brands in India and the onset of the digital age. “We want to focus on the development of mid-market business hotels of around 120 to 170 keys, as the breakeven is faster. We do not want to do luxury hotels as a strategy”, she claimed. Brigade Enterprises wants to develop hotels as mixed-used projects primarily.

Her last much-talked-about project was Bengaluru’s Art Café, positioned in a fourth-floor corridor connecting the World Trade Center and Sheraton Grand Bangalore Hotel at Brigade Gateway. A sky bridge venue overlooks the scenic waterfront and shopfronts of Orion Mall and features the works of emerging as well as established artists. She has described the bridge as symbolic at several levels. “Apart from literally bridging two very different buildings, an office and a hotel, it bridges the way different people spend their time - work vs. leisure.”